Book online our full-day Private Tour in Delphi from Athens to the particularly important historical area of Delphi where we will see one of the most shocking landscapes in the world.
We will explore the archaeological site of Delphi, the Kastalia Fountain (where it is said that Pythia delivered her oracles) , the Temple of Athena Pronaia and the Treasure of Athenians, the Temple of Apollo, the Sacred Way, the Ancient Stadium of Delphi and the Ancient Theater, as well as the Archaeological Museum of Delphi.
We will swim and have lunch after visiting Delphi in a beautiful coastal village nearby.
Upon returning to Athens through the village of Arachova, we will take a walk through the lush green valleys, as the nature, at its best, embraces the curves of the road and creates a landscape of absolute tranquility and relaxation.
Don’t forget we can make a stops everywhere as it is your private Tour!

Our driver will pick you up from your hotel (suggested time 08.30) and we will start heading north towards Delphi. On our way, we will pass one of the largest planes near Athens and where most of the fresh vegetables for the big city come from. On the one side of it is situated the modern city of Thebes, which was built on top of the ancient one and therefore unfortunately not much remains from that very historical ancient city state, home of the tragedy of Oedipus. Next larger city on your way will be Levadia, built on the foothills of two very impressive rocks, where the oracle of Trofonios used to exist.

Arrival in Delphi! We will see the Castalia Spring and we will visit the main archaeological site of Delphi located at the Slopes of Mount Parnassos with the Temple of Apollo, the Treasuries of the Athenians, the Ancient Stadium and the Ancient Theatre. We will visit Athena Pronaia Sanctuary, the most photographed spot in Delphi.

Next stop is Delphi museum, with it’s spectacular exhibits covering along time span from prehistory to Late Antiquity.

After your visit in Delphi, for which you will need approximately 2 and a half hours, you will enjoy some free time  in a beautiful coastal village nearby for swimming and lunch.

Return to Athens passing by the picturesque mountain village of Arachova, built on the south slopes of Parnassus (at 1000 meters altitude), well known for its attractive hand-woven carpets, rugs and quilts, as well as for its wine and cheese (short photo stop).
Back in Athens, you will be dropped you off either at your hotel, or another location of your preference. 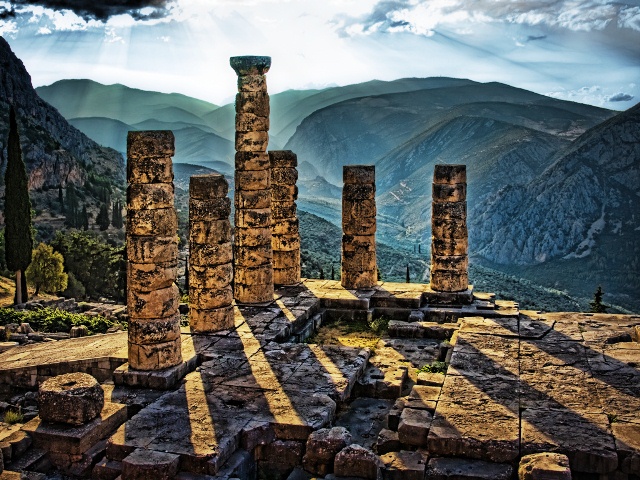 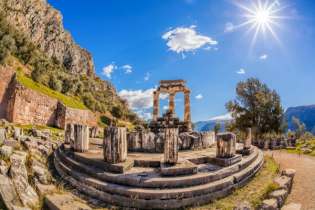 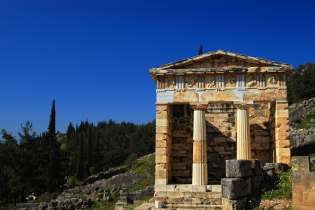 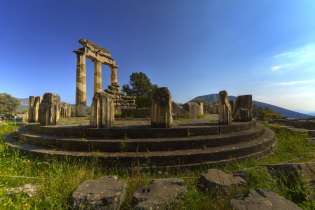 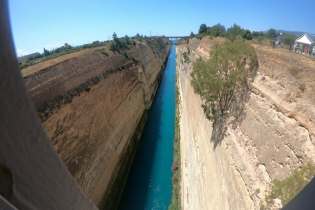 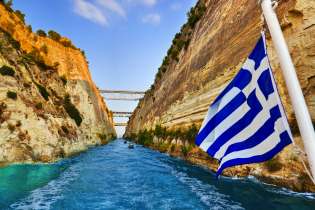 All our Epic Tours offered are accompanied by one of our local English speaker group guides. The aim of the group guide is to take the hassle out of your trip and to help you have the best experience possible.
The guide has excellent knowledge of the places visited and will provide you information throughout the whole trip, including historical, cultural and social aspects. Your guide takes care of all the essential things of the tour, offers suggestions for things to do and see and introduces you to the local communities.

We use a minimum three-star rating,conveniently located hotels and apartments with all the essential modern conveniences. Lodges that practice good eco-tourism, use products and hire staff from the local villages, walk lightly on the surrounding environment and are true to the area they represent.
Accommodation on all our trips is on a twin or double bed basis. Single upgrades are available upon request and depend on availability.

Concerning the transportation, our company cooperates with leading transfer companies which use vehicles of the latest technology with the most stringent standards. All minivans are equipped with comfortable seats, air condition and large windows.
Our experienced drivers will do everything they can so that your transfer be safe and pleasant.
In all our Epic tours offered, we have made an effort to include as many attractions as possible, therefore reducing our stay in the bus to the minimum, by making many stops.

When it comes to meals, Epos Travel & Tours strikes a perfect balance, since gastronomy is one of the main aspects of the total tour experience offered.
We include most meals (at selected seaside or traditional taverns) to save you time and money, yet we also leave enough free time so you can sample Greece’s gastronomic delights on your own.
Epos travel packages vary as to the number of meals included.All provided meals are clearly stated on the tours’s inclusions section.
As most of our hotels offer anything from coffee to a full breakfast, you can start the day the way you like best with high quality local  products.
Lunch is your chance to make culinary discoveries of your own – Your tour guide can give you tips about recommended places if asked.
When your itinerary includes a special experience, such as fishing on a hired boat,rafting or wine tasting, lunch will be included.
Please note that if you have any special dietary requirements you should inform us prior to the trip. We can provide vegetarian and vegan meals. Please feel free to contact us, regarding any questions you may have about food, so we can provide you the best options possible.

Meeting and finishing point: Most of our tours -unless otherwise stated in the trip’s information section- start and end at Syntagma square in Athens. Tours commence at 08:00 on the starting date and finish between 21:00 and 22:00 on the finishing point. Please note: In case you leave Greece on the day the tour ends,it is advisable to book your return flight at least 3 hours after our scheduled return time. That will give you the tranquillity and ease of mind, avoiding any unfortunate events that could blemish you vacation.

When you book  with us, please have in mind that our tours don’t include any accommodation before or after the tour. So we advise you to make any stay arrangements for the date the tour ends. In relation to your arrival date and your stay in a hotel in Athens or in another city for one or more days before or after the trips, please feel free to contact us and we shall arrange it at no cost.

With regard to your transfer to and from the airport, we are able to help, if you ask us about it. We can arrange a private transfer from the airport to your hotel in Athens and vice versa 24/7. Your private driver will be waiting for you at the exit of the airport, holding a placard with your name on it.
Regarding the issue of your air ticket you know that the sooner you buy it the more cheap it comes. You are most likely to find lower prices in your home country. But it is worth trying together.

Please check if you belong in one of the Free or Reduced admission categories below.

• Members of the Chamber of Fine Arts of Greece and equivalent Chambers of member-states of the EU, upon presentation of their membership card

• Members of the ICOM-ICOMOS, upon presentation of their membership card

• Young people, up to the age of 18, upon presentation of their Identity Card or passport for age confirmation.