The temple of Zeus was built with limestone around 330 BC. on the ruins of an earlier archaic temple. Its foundation is about 44.5 meters long and about 22 meters wide. The temple combines the three architectural styles of Greek antiquity. Specifically, it had an external colonnade of 32 Doric columns and two columns in the pronaos, underground sanctuary behind the vault and an inner colonnade of 14 Corinthian columns that continued as Ionic on the second floor. The large columns of the peristyle had a height of about 13 meters and consisted of 13 cylindrical vertebrae. To the east of the temple is preserved the foundation of an oblong altar.

The temple of Zeus was dominating a large and well-organized sanctuary where Jupiter and the infant benefactor were worshiped.

The ancient stadium of Nemea has been built in a valley area with imposing views. It was built in the late 4th century BC. and had a capacity of 40,000 spectators. The track was 178 meters long.

In 1974, the excavation of the ancient stadium began by the American Archaeological School, headed by Thomas Miller. The excavation was completed in 1991 and then the Nemea revival was organized.
Peloponnese Ancient Nemea Epos Travel Tours 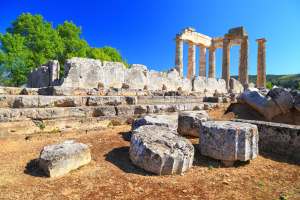