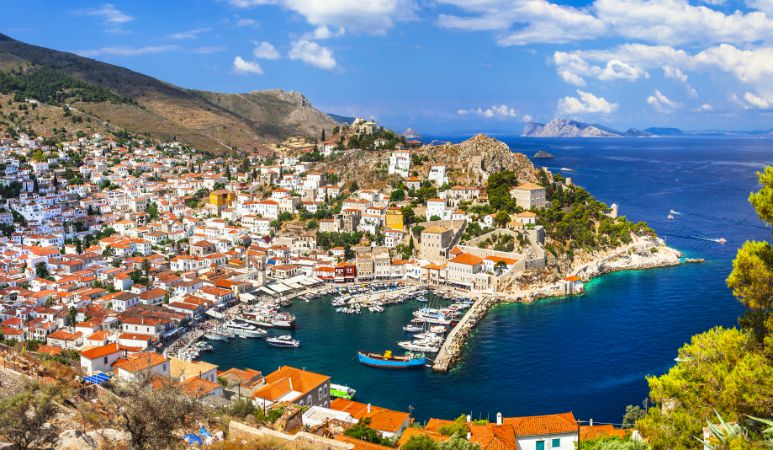 If Aegina and Poros have rich mythological-prehistoric elements, Hydra has always had a universal recognition for its decisive contribution to the Greek revolution for independence in 1821.

Not that Hydra was not inhabited as old as the other islands. According to archeological findings, the settlement on the island dates back to the very pre-Homeric period, to the Late Neolithic era (3000 – 2600 BC).

The name of Hydra is due to the abundant waters that gushed from the rich springs that it had in antiquity. Historians mention the island with the name Hydra and in the interior of the island have been preserved traces of ancient settlements, as evidenced by archaeological excavations.

Ηydra does not seem to have succeeded in the centuries that followed in evolving into a socially and historically organized place. Around the 13th BC. century, becomes a place of settlement and residence of Dryop farmers, shepherds and fishermen, hard-hearted people without special ambitions and pursuits beyond the narrow borders of their place, who previously lived in the mountainous areas of Parnassos and Oiti and fled to the island under the pressure of Dorians.

Two centuries later, with the descent of the Dorians, the Dryopes disappear and every trace of life on the island is lost, which remained a rough and almost deserted place, cut off from historical and cultural development.

Ιn Early Antiquity its historical role remains insignificant. It is most likely that it belonged to the jurisdiction of the mighty Kingdom of Mycenae. Around 560 BC. they belonged to the city Hermioni, which is exactly opposite, until 525 BC. and then, according to a historical testimony of Herodotus, it was bought by Samians political fugitives to be later handed over by them to the Troezenians, who persistently sought its possession mainly for the purpose of cultivating and grazing their sheep and goats. Hydra remains under the rule of the Troezenians until the 4th BC century.

There is no information about the period of the Roman Empire and the Byzantine Empire on the island. This fact initially created the impression that Hydra remained uninhabited in Roman and Byzantine times. However, the excavations on the island testify that Hydra is currently inhabited.

It seems that due to the frequent pirate raids a large number of its inhabitants had left the island, while the rest had retreated inside.

The beginnings of the 15th century find Hydra inhabited by a few agricultural and pastoral families. From 1460 begins the first intense colonial movement and settlement in Hydra of orthodox Arvanite refugees.

The new inhabitants of Hydra merge with the locals. The rocky and barren land of Hydra forced them to turn to the sea and become excellent sailors.

It is exactly the time when the reconstruction and creation of the current city of Hydra begins with the first residential core on the hill of Kiafa, apparently for the safety of the inhabitants, to be protected from possible invaders and pirates.

The turbulent conditions that prevailed in the 16th and 17th century with the war conflicts during the Venetian-Turkish (1700 – 1715), the Russo-Turkish war (1768 – 1774), and the uprisings in Greece during the same century together with the ensuing Lack of security was the main reason for the settlement on the island of young families from various parts of Greece and Asia Minor.

At this time (second half of the 17th century), the current settlement of Hydra begins to form but also to lay the foundations for the later development of shipping, since the barren land of the island forced the inhabitants to seek at sea the sources of survival and later of their prosperity.

This demographic boom certainly had its positive and negative consequences for the evolution of the Hydraic social course. Among the most positive were the promotion of the development of trade and mainly the rapid development of shipping in Hydra.

In the 18th century, the people of Hydra began to build small sailboats and from the middle of the same century, large-capacity ships that sailed throughout the Mediterranean and the Black Sea.

The period of financial strength, the suppression of piracy and the internal peace that followed in the following years, gave the Hydraeans the opportunity to organize their society as they wished, while the constant battles that the Hydraean crews were forced to give to the pirates, who then they were looting the Mediterranean from one end to the other, turning them in time from insignificant farmers and shepherds, to daring experienced sailors.

From a very early age, Hydra was used as a naval base, leading the way in maritime trade and communications. Trade flourished at the end of the 18th century and the beginning of the 19th. The Hydraeans then took advantage of the Anglo-French conflict and made huge profits, controlling the maritime trade, breaking the blockade imposed by England on French ports during the Napoleonic Wars.

As a result, at this time the island experienced its greatest strength and consequently its economic and spiritual prosperity. The people of Hydra gradually became masters of the sea routes of the Mediterranean and Hydra became the first naval power among the Greek islands. 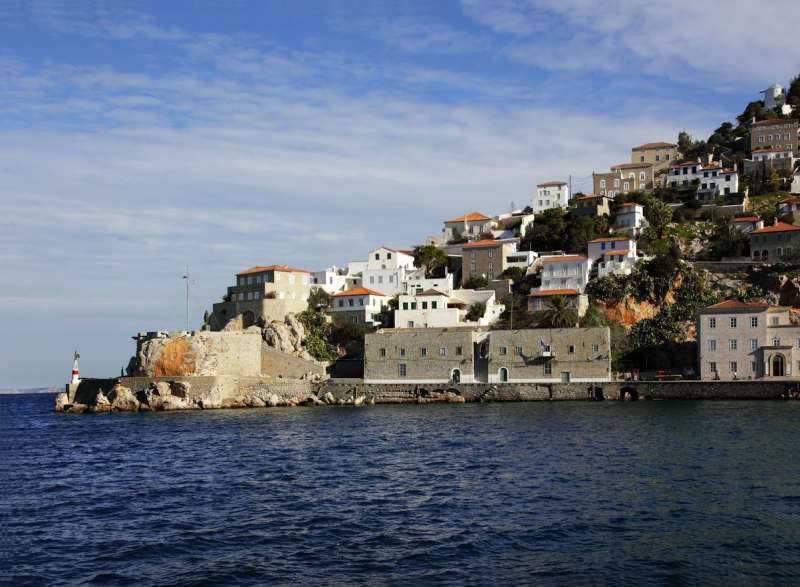 The high level of development of the maritime and commercial activity is proved by the establishment of a naval school with the transfer of Italian and Portuguese teachers for the more systematic teaching of the naval art, as well as the establishment of special laws and rules for the regulation of the relevant transactions. It is therefore fully understood, why the moment of the start of the struggle in 1821 found this small and previously insignificant island of the Saronic Gulf, numbering about 27,000 inhabitants.

Hydra’s help in the national liberation struggle of 1821 was important. Its fleet numbered 186 small and large ships with a total capacity of 27,736 tons. It was twice that of Spetses which had a force of 64 ships totaling 15,907 tons, while Psara had 35-40 ships and Kasos 15. At the same time the crews had acquired a large war experience due to clashes with Algerian pirates.

The Hydra fleet together with the fleet of Spetses and Psara dominated the sea during the seven-year struggle, thus decisively contributing to the liberation of Greece, while sacrificing human lives, ships and money and emerging leaders and fighters.

An opportunity for the development and revitalization of Hydra society was given in the 50’s, when various artists and filmmakers discovered Hydra and used it profusely in their films. Immediate consequence was the rapid tourist and economic movement on the island, which has since developed into a cosmopolitan tourist resort.

In the 1950s and 1960s, foreign writers such as the Australian George Johnston, the Swede Axel Jensen and the Canadian Leonard Cohen bought houses in Hydra and laid the foundations of a foreign community that still exists today.

In the 50’s the shooting of the movie “The Child and the Dolphin” by Sophia Loren took place here and Hydra became known internationally.

Among the most famous films shot in Hydra is the famous “Girl in Black” by Michalis Kakogiannis and Elli Lampeti, which received rave reviews at European festivals and also the great film composed by Jules Dassen “Phaedra” by Melina Mercuri and the famous actors Anthony Perkins and Ralph Valone.

Hydra became an international destination mainly between 1960-70 when famous people from all over the world, such as JohnLennon, Eric Clapton, Rolling Stones, Onassis and Callas, Rex Harrison, Peter Ustinov, Leonard Cohen and many others passed through the island and Hydra became a source of inspiration for many intellectuals and artists such as Hatzikyriakos-Gikas, Seferis, Eggonopoulos, Henry Miller, Tetsis, Byzantios.

Today, Hydra remains the jewel of the Saronic Gulf, a unique phenomenon of historical and architectural wonder throughout Greece and certainly one of the most important resorts in the country.

The permanent inhabitants of the island today do not exceed 2,000. 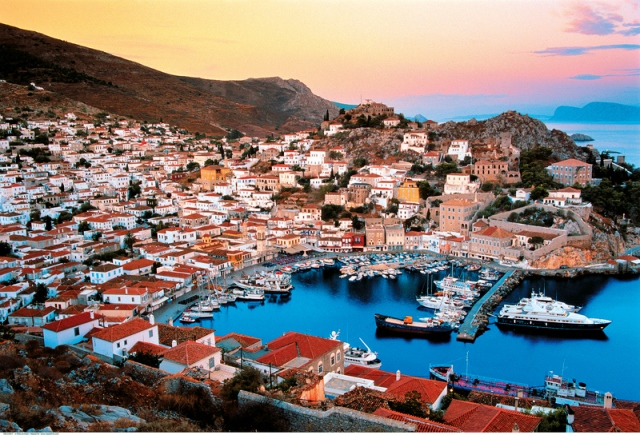 Rubbish trucks are the only motor vehicles on the island, since by law, cars and motorcycles are not allowed. Horses, mules and donkeys, and water taxis provide public transportation. The inhabited area, however, is so compact that most people walk everywhere.

Βooks about or set on Hydra