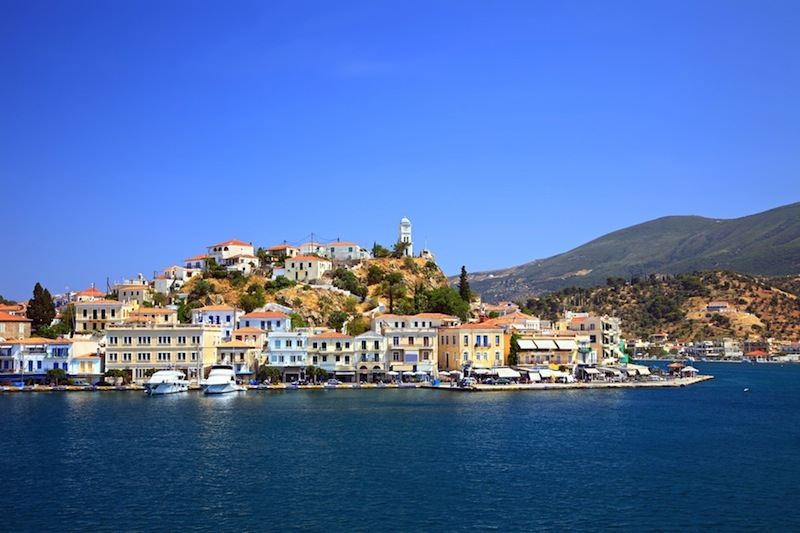 On this route that includes the island of Poros, Troezen and the peninsula of Methana we will learn a few things about Theseus, a mythical hero, the second most popular hero after Hercules.

Theseus, then, was born in Troezen. His father was the king of Athens Aegeus or the god Poseidon or ….. both! Certainly his mother was Aethra, daughter of the king of Troezen  Pittheus, son of Pelops.

When Aegeus, desperate for his impotence, went to the Oracle of Delphi, he received an incomprehensible oracle. Returning to Athens, he thought of passing by his friend Pittheus, the king of Troizina, who hosted him. Aegeus mentioned the oracle to him, so Pittheus, understanding its meaning, intoxicates Aegeus and throws him on the bed of his daughter Aethra, thus aiming to become the grandfather of the heir to the Athenian throne. In the morning, when Aegeus recovered from his drunkenness next to Aethra, he persuaded her to promise him that if he had a descendant she would secretly raise him in the city.

He also hid his sandals and sword under a large rock, telling Aethra that when his child grows up enough to lift the rock, she should order him to go to Athens and show him the objects. Meanwhile, the night she slept with Aegeus, Aethra dreamed of Goddess Athena, who guided her to walk on reefs on the islet of Sfairia (Poros), which is so close to the coast of Troezen (Troizina), that one can go there on foot. As she was walking in the sea, she paternity accepted the sea hug of the god Poseidon and captured the hero before she mingled with her mortal lover. So, after nine months, Aethra gave birth to Theseus. The hero, therefore, had an uncertain, divided between the Athenian king  Aegeus and Poseidon, the god of the sea.

Theseus spent his childhood completely protected in the palace of his grandfather Pittheus. But he was a child who could not wait to grow up and go on adventures. When Hercules once visited Troezen, the little boy Theseus did not hesitate to attack the lion skin of the hero, thinking it was a real beast, while his peers for the same reason ran to hide. When he became a teenager he learned from his mother about his father Aegeus, lifted the rock, took the relics placed there and prepared to travel to Athens and claim his place there as the king’s son and successor.  On his way to Athens he had to do his first feats after he met in front of him and killed several robbers who were looting the area. When he arrived in Athens and met Aegeas, Theseus had to go to Crete, kill the Minotaur and free the young Athenians who were being held there. Shortly afterwards he became king of Athens. His son was Hippolytus, who also became a hero for Troezen and was worshiped as a god. In the city of Troezen there was an important temple dedicated to him.

The ruins of Ancient Troezen (Troizina) are located near the present village of Troizina. The archeological findings are presented in the Museum of Poros.

Ancient Troizina was built on the northern slope of Mount Aderes.

From the citadel, which was located on a hill at an altitude of 313 m., descended the two elongated arms of the fortified enclosure of the ancient city. The market was located in the smooth area at the foot of the mountain, while the “most eminent” (Pausanias II.32.1) temple of Hippolytus was located west, outside the city walls, at a distance of about 800 m. From the market.

Troezen (Troizina) was an ancient city. Orus is mentioned as its first king. According to the legend, the city took its name from Troizinas, the son of Pelopas.

The Troezenians took part in the Trojan War, with ships and warriors, as mentioned in Homer’s Iliad in the famous “Catalogue of ships“, under the leadership of the king of Argos Diomedes, together with the cities Epidaurus, Ermioni, Masita, Aegina, etc.

In the following years, the Dorians dominated in Troizina, as well as in the rest of the Argolic peninsula.

The Calaurian Amphictyony (Poros) is not known exactly when it was founded. It is believed to have existed since the Mycenaean era, while according to other views it was created in the 8-7th century BC, as an alliance of cities threatened by the powerful city of Argos.

During the Persian wars the Troezenians participated in the alliance of the Greeks. In fact, Troizina (Troezen) was one of the areas in which the Athenian women and children took refuge and were hosted when the Persians invaded Attica.

During the years of the Persian Wars, Troizina – in contrast to neighboring Argos – actively participated in the joint effort of the Greeks to repel the invaders.  In 480 BC. – as Herodotus testifies – the Troezenians offer 5 ships to the common fleet of the Greeks and then took part together with other Peloponnesians in the fortification of the Isthmus.

The Troezenians were distinguished for their bravery both in the ambiguous outcome of the Battle of Artemisium, and in the catalytically important Battle of Salamis, which ended in Greek triumph and the destruction of the enemy.

In the Revolution of 1821, the Third National Assembly was convened in Troizina  in 1827, which elected Ioannis Kapodistrias governor of Greece.

The Methana Peninsula is located in the northeastern part of the Peloponnese at the western end of a volcanic arc. It has significant geothermal potential and the volcano is characterized as active. The area is known for its famous baths. There are about 30 volcanic structures on the peninsula and the last volcanic activity took place underwater in 1700. In the Methana peninsula there are about 60 km of marked trails.

The peninsula has samples of continuous habitation dating back to the Neolithic era. according to the important archeological findings in the settlement of Paleokastro (Vathi) where the Acropolis of ancient Methana was located, at the top of the mountain of Chelona (Turtle). A figurine (head) that was found a few years ago is of Cycladic style and dates back to 3,000 BC.

In the next period of Early Helladic (2800-1900 BC) there seems to be more intense habitation in the area. Early Helladic settlements were located in the Isthmus and on the island (Nisaki) of Methana.

In the 3rd century BC. In the Hellenistic period when the king was the Macedonian Antigonus Gonatas (283-239 BC), the volcano of Methana erupted and at the same time the peninsula was conquered by the Ptolemaic dynasty for about a century and was named Arsinoe in honor of the wife of Ptolemy IV.

Poros is an island in the Saronic Gulf. It has about 4,000 inhabitants. It is located a short distance from the Peloponnese coast and the opposite village of Galatas in the area of Trizinia. It is known, among other things, for the great lemon forest that is located on the above coast, while it is popular as a place of short getaways from Athens.

In fact, Poros consists of two islands, Sphairia and Kalavria, which are separated by a very small sea channel. Kalavria is the oldest island that emerged after the eruption of the volcano and the flood that followed. It is dominated by limestone and shale rocks. Sphairia is also of volcanic origin and emerged from the eruption of the volcano of Methana. The city of Poros is built right on a small vaulted crater.

The historic clock (Roloi), high on the hill of Sphairia, in the center of Poros, is a trademark of the island.

Recent studies have shown that Poros has been inhabited since the Bronze Age. The tombs on the island date back to the Mycenaean Period and human buildings have existed in it since at least 1000 BC.

In the ancient city of Kalavria, there are ruins of a temple dedicated to god Poseidon. This temple was the center of Amphictiony of Calavria (the Calaurian Amphictyony). The exact date of its construction is not known, although researchers estimate that it was built around 520 BC. The dimensions of the temple, which has a Doric style, is 27.4 x 14.4 m. It is supported by 6 columns in width and 12 columns in length.

Here, in the Temple of Poseidon, in 322 BC, the great Athenian orator Demosthenes by was poisoned drinking a coniine-containing mixture of poison hemlock., after escaping capture by the governor of Macedonia Antipater. Also on the north beach of Kalavria there is the ancient port submerged in the sea.

According to the most prevalent version, the founding of the “Amfiktionia of Kalavria” dates back to the geometric and archaic era and it was based on the temple of Poseidon.

The Amphictiony of Calavria (the Calaurian Amphictyony) was a Religious and later political federation. Its members were seven cities, Ermioni, Troezen, Epidaurus, Aegina, Prasies, Athens and Orchomenos.

The Amphictiony was used to resolve any disputes, as well as for commercial transactions. It experienced its greatest prosperity from the last prehistoric years until the 5th century BC.

Around 720 BC inhabitants from Achaia and Troizina founded Syvari in Lower Italy, giving the name Calavria (Calabria) to the whole region of Southern Italy, probably from the name of the Amphictiony of Calavria.

The legend of Athena Apaturia is charming. According to mythology Aethra, mother of Theseus, going to the island of Sphairia to offer values ​​to the memory of Spheros, after a dream sent to her by the Goddess Athena, she met Poseidon.

In that place she founded a temple in honor of Athena Apaturia and named it the Holy Sphairia. In honor of Athena Apatouria was held the feast of Apatouria, a political celebration held by the Athenians and all the Ionians in general, except the Colophons and the Ephesians. It took place in the month of  Pyanepsiona (October) and lasted for three days.