The 12 Gods of Olympus – The Olympians

The twelve Olympians were a race of deities, primarily consisting of a third and fourth generation of immortal beings, worshipped as the principal gods of the Greek pantheon.
Plato connected “twelve gods” with the twelve months, and implies that he considered Pluto one of the twelve in proposing that the final month be devoted to him and the spirits of the dead.
They were called Olympians because, according to tradition, they resided on Mount Olympus, place that they won after a ten-year-long war of gods, in which Zeus led his siblings to victory over the previous generation of ruling gods, the Titans.

Who were the twelve main Olympians and Greek gods?

1. Zeus (Jupiter, in Roman mythology): the king of all the gods and god of weather, law and fate 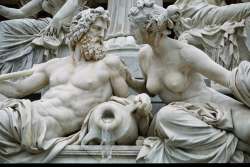 King of the gods (and father to many) and ruler of Mount Olympus; god of the sky, lightning, thunder, law, order and justice.
The youngest child of the Titans Cronus and Rhea. Brother and husband of Hera, although he had many lovers
Brother of Poseidon, Hades, Demeter, and Hestia.
His symbols included the thunderbolt, eagle, oak tree, bull, scepter, and scales.

2. Hera (Juno) the queen of the gods and goddess of women and marriage

Queen of the gods and the goddess of marriage, women, childbirth and family.
The youngest daughter of Cronus and Rhea. Sister and wife of Zeus. Being the goddess of marriage, she frequently tried to get revenge on Zeus’ lovers and their children. She was usually depicted as a beautiful woman wearing a crown and holding a royal, lotus-tipped sceptre, and sometimes accompanied by a lion, cuckoo or hawk.
Her symbols include the peacock, cuckoo, and cow.

Goddess of love, pleasure, passion, procreation, fertility, beauty and desire.
The daughter of Zeus and the Oceanid Dione, or perhaps born from the sea foam after Uranus’ blood dripped into the sea after being castrated by his youngest son, Cronus, who then threw his father’s genitals into the sea. Married to Hephaestus, although she had many adulterous affairs, most notably with Ares. Her name gave us the word “aphrodisiac”, while her Latin name, Venus, gave us the word “venereal”. She was depicted as often accompanied by the winged godling Eros (Love).
Her symbols include the dove, bird, apple, bee, swan, myrtle, and rose.

4. Apollo (Apollo): god of prophesy, music and poetry and knowledge

God of light, the Sun, prophecy, philosophy, archery, truth, inspiration, poetry, music, arts, manly beauty, medicine, healing, and plague.
The son of Zeus and Leto, and the twin brother of Artemis.
His symbols include the Sun, bow and arrow, lyre, swan, and mouse.

God of war, violence, bloodshed and manly virtues.
The son of Zeus and Hera, all the other gods despised him except Aphrodite. His Latin name, Mars, gave us the word “martial.” Ares was depicted as either a mature, bearded warrior armed for battle, or a nude, beardless youth with a helm and spear.
His symbols include the boar, serpent, dog, vulture, spear, and shield.

Goddess of the hunt, the wilderness, virginity, the Moon, archery, childbirth, protection and plague.
The daughter of Zeus and Leto, and the twin sister of Apollo. Artemis was usually depicted as a girl or young maiden with a hunting bow and quiver of arrows.
Her symbols include the Moon, horse, deer, hound, she-bear, snake, cypress tree, and bow and arrow.

Goddess of wisdom, handicraft, and warfare.
The daughter of Zeus and the Oceanid Metis, she rose from her father’s head fully grown and in full battle armor. She was depicted as a stately woman armed with a shield and spear, and wearing a long robe, crested helm, and the famed aigis–a snake-trimmed cape adorned with the monstrous visage of the Gorgon Medousa
Her symbols include the owl and the olive tree.

Goddess of the harvest, fertility, agriculture, nature and the seasons. She presided over grains and the fertility of the earth.
The middle daughter of Cronus and Rhea. Also the lover of Zeus and Poseidon, and the mother of Persephone. Demeter was depicted as a mature woman, often wearing a crown and bearing sheafs of wheat or a cornucopia (horn of plenty), and a torch.
Her symbols include the poppy, wheat, torch, cornucopia, and pig.

God of wine, the grape vine, fertility, festivity, ecstasy, madness and resurrection. Patron god of the art of theatre.
The son of Zeus and the mortal Theban princess Semele. Married to the Cretan princess Ariadne. The youngest Olympian god, as well as the only one to have a mortal mother.  He was depicted as either an older, bearded god or an effeminate, long-haired youth.
His symbols include the grapevine, ivy, cup, tiger, panther, leopard, dolphin, goat, and pinecone.

Master blacksmith and craftsman of the gods; god of the forge, craftsmanship, invention, fire and volcanoes.
The son of Hera, either by Zeus or through parthenogenesis. Married to Aphrodite. His Latin name, Vulcan, gave us the word “volcano.” He was depicted as a bearded man holding a hammer and tongs–the tools of a smith–and sometimes riding a donkey.
His symbols include fire, anvil, axe, donkey, hammer, tongs, and quail.

Messenger of the gods; god of travel, commerce, communication, borders, eloquence, diplomacy, thieves and games. He was also the guide of dead souls. Hermes was depicted as either a handsome and athletic, beardless youth or as an older, bearded man, with winged boots and a herald’s wand.The son of Zeus and the nymph Maia. The second-youngest Olympian, just older than Dionysus.
His symbols include the caduceus (staff entwined with two snakes), winged sandals and cap, stork, and tortoise (whose shell he used to invent the lyre).

God of the seas, water, storms, hurricanes, earthquakes and horses.
The middle son of Cronus and Rhea. Brother of Zeus and Hades.  Married to the Nereid Amphitrite; although, as with many of the male Greek gods, he had many lovers. He was depicted as a mature man with a sturdy build and dark beard holding a trident
His symbols include the horse, bull, dolphin, and trident.