From Athens To Corinth

We start early from Athens and take the Athens-Corinth highway.

Once we get out of Athens’ urban fabric, we reach the once sacred, now industrial, city of Elefsina and after a while we enter the comfortable motorway of Olympia Odos.

To our left we see the Saronic Gulf and Salamina, the favorite island of the ancient Athenians, while on our right a mountain range is rising which includes the Kitheronas, Pateras Mountains and ends in Gerania mountains above Loutraki. 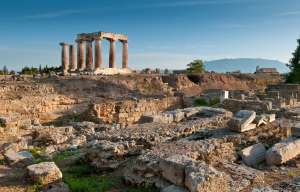 From the height of Megara, an ancient city, we begin to discern Aegina, the prince of the Saronic Gulf, Agistri and the small islands of Diaporia.

The most famous King of Megara was Byzas. In 657 BC Vyzas, as the head of a colonial enterprise organized by the city of Megara, led the Megara colonists to the Bosporus region. There the Megarians founded a new city, in which they gave the name of its founder: Byzantium.

In Megara was born, lived, died and buried, Heracles’ wife Megara, whose traveler Pausanias (2nd century AD) reports that he saw her tomb.

In ancient times, between the wall of Isthmus and its enclosure, there was the diolkos, a road through which goods and small ships were transported to avoid making the round of the Peloponnese.

The diolkos, the construction of Perandros, was a paved road, dressed in wood, on which the ships slid with the help of fat. The ships that paid fees were the most important income of Corinth.

The idea of ​​the canal has existed since the time of Periadros in 602 BC. The first to try to achieve it was Neron, in 66 AD, based in plans by Julius Caesar and Caligula. After the death of Nero, Herod Attikos continued the effort, but he also abandoned it. 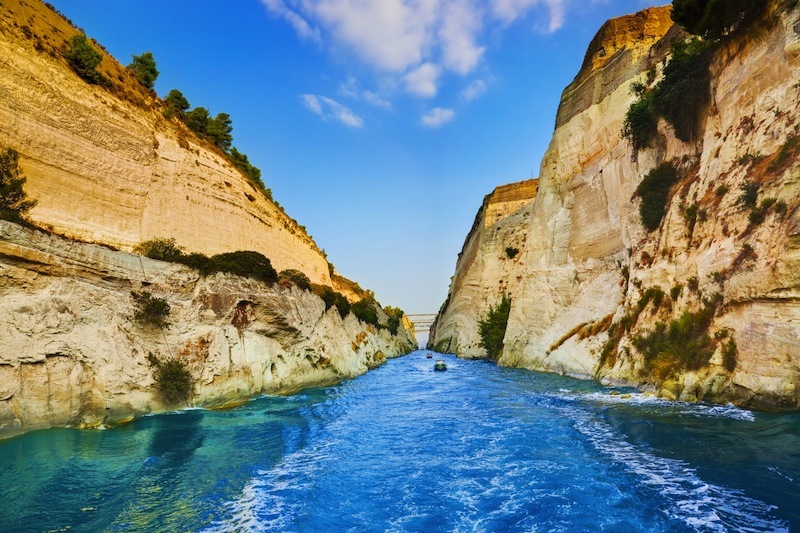 Ancient Corinth was built at the foot of Acrocorinth, the rocky hill southwest of the modern city. Corinth had two streams, Lecheo to the north of the ancient city, on the coasts of the Corinthian Gulf and Kechres to the east of the ancient city, on the Saronic coast. There he was the important cult site of the Isthmus. Isthmia was a place of worship dedicated to Poseidon and in honor of him held every two years sports matches, Isthmia.

Mythological figures associated with Corinth were Melikertis, Sissyphus, who founded Isthmia, Vellerefontis, Iason and Medea.
Homer in the list of ships and cities mentions Corinth to participate in the Trojan campaign under the leadership of the Agamemnon king of Mycenae. After the Dorians descended, Dorians settled in Corinth, displacing the older populations, mainly of Ionian origin, to the east. With the establishment of the Dorians, the aristocracy was established in Corinth.
In the middle of the 7th century BC the rule of the aristocracy was abolished and Tyrannia was established with the first Tiranos the Kylissos. Kypselos was succeeded by Periandros, who was one of the seven wise men of the Archaic period.

At the time of Periandros Corinth experienced great prosperity and was one of the richest cities in the Greek world. Its trade earned great riches and life there was very expensive to the extent that this stay was only accessible to very wealthy people. Then came the phrase “all of my many Corinthians.” As it was next with the rich came to Corinth and women who offered love for a fee, from the usual prostitutes, who used to live in the grazing, the market or in the smileypeia, as the eminent partners that the association with them cost a fortune, such as famous Laïda. Lais, therefore, lived in the city of the “loose morals” of ancient Greece, Corinth, and was one of the prostitutes of the temple of Aphrodite. 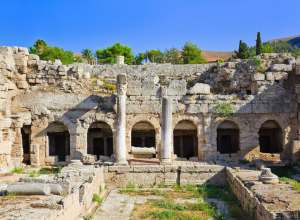 In the Persian wars the Corinthians were among the leading forces of the Greek alliance against the Persians. They participated in the battle of Salamis with 40 ships, as well as in the battle of Plataea with 5,000 hoplites. In the following years, Corinth developed a strong commercial competition with Athens, which led to the outbreak of the Peloponnesian War. Corinth formed an alliance with Sparta and other cities of ancient Greece, against Athens, offering the alliance its powerful fleet, the only one in ancient Greece that could face the Athenian. 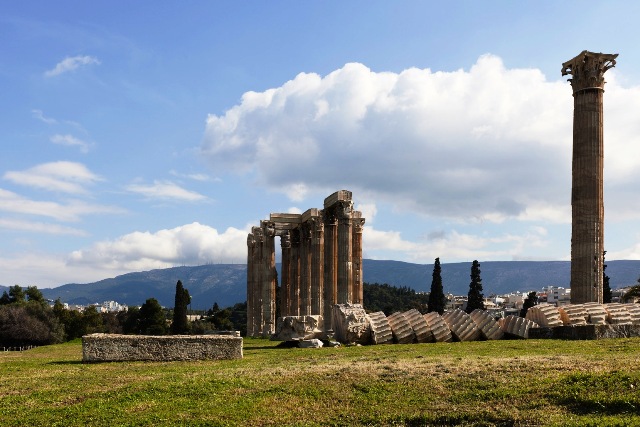 In 336 BC. Alexander the Great assembled in Corinth the alliance of Greek cities against the Persians. In the following years the power of Corinth was limited and gradually overshadowed by the newly established Achaic Confederacy. In 146 BC. he allied with the Achaic confederacy in a last attempt by the Greeks to confront the Roman general Lefkios Mammios who traveled to the Peloponnese. The Greeks were defeated in the Isthmus, followed by the destruction of Corinth.

The city, in 44 BC, grew again from Julius Caesar and in 51-52 AD. receives the visit of Apostle Paul, who also wrote two letters to the Early Christian brotherhood of Ancient Corinth. Its center is organized south of the temple of Apollo and includes shops, small temples, fountains, a bath and other public buildings.

In 267 AD, with the invasion of the Heroules, the decline of the city began, but it survived, despite the repeated destructions and invasions, until it was liberated by the Ottomans in 1822.

The archaeological site of Ancient Corinth is located at the northern foothills of the Acrocorinth hill, around the Archaic Temple of Apollo. Extensive excavations have brought to light the Roman Agora of the city, temples, fountains, galleries, bathing facilities and various other monuments. The investigations were extended as the Akrokorinthos fortress to the south of the organized archaeological site and prehistoric settlements in the Corinthian Plain in the north. To the south of the organized archaeological site came the Theater, the Roman Conservatory, the sanctuary of Asclepius and Health (Asklepieion), cemeteries, ceramics workshops (Kerameikos), walls, as well as various other buildings such as the Frankish Quarter and a significant number of Venetian and Ottoman monuments.

Akrokorinthos is a steep cliff of 575 meters above sea level, dominating the Corinthian plain. On its northern slopes was built Ancient Corinth, Corinth. Because of its morphology, it has been used since ancient times as a viewpoint that emerged in a castle (Acropolis), from which all possible raids from Sterea Ellada or from the sea
According to Greek Mythology, the first owner of the area was the mythical king of Corinth, the Bellerophontis, who devoted the space to the god Helios. The estates under Acrocorinth.

To honor the goddess Aphrodite, Medea built a temple at the top of the Acrocorinth. It was a humble and unpretentious building but the situation changed dramatically when the water arrived there. This was the feat of Sisyphus, the cruel king of Corinth, when he once saw Zeus kidnapping Asopos’ daughter. He told Asopos hiding in return to solve the problem of water shortage on the hill. So Vrachos acquired his first fountain the famous Peirinis.

Acrocorinth was fortified for the first time by Kylissos and his son Tyrant Periandros in the 7th-6th century BC. and slowly evolved into an Acropolis. The Macedonians in the 4th century BC repaired and reinforced the walls. In 146 BC. the Roman general, Lefkios Mohamis Achaikos, destroyed Corinth and its Acropolis, officially occupying Greece. Julius Caesar repairs the castle in 44 BC. Another repair was made in the 6th century by Justinian and some additions were observed until the 12th century. In 1210 the castle was occupied by the Franks, and the defender of Leon Sgouros suicides by jumping on horseback from the walls. The Franks carry out many repairs. 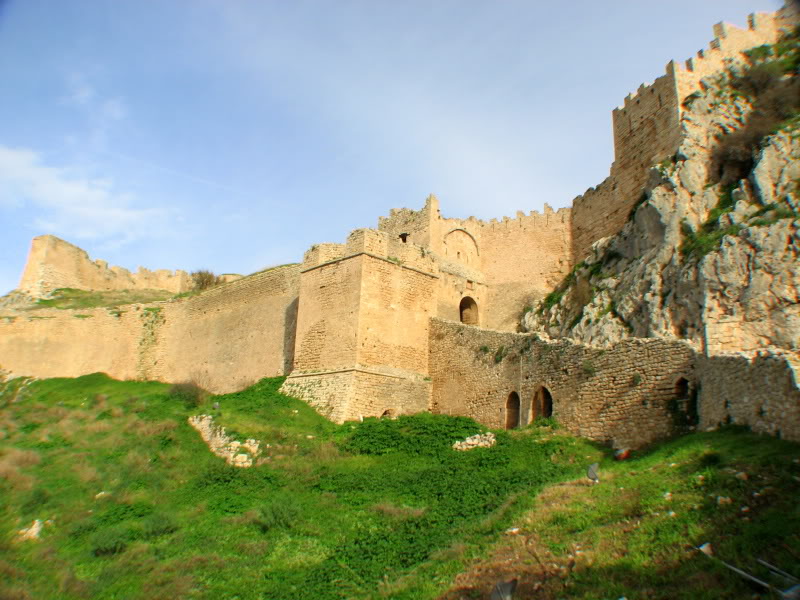 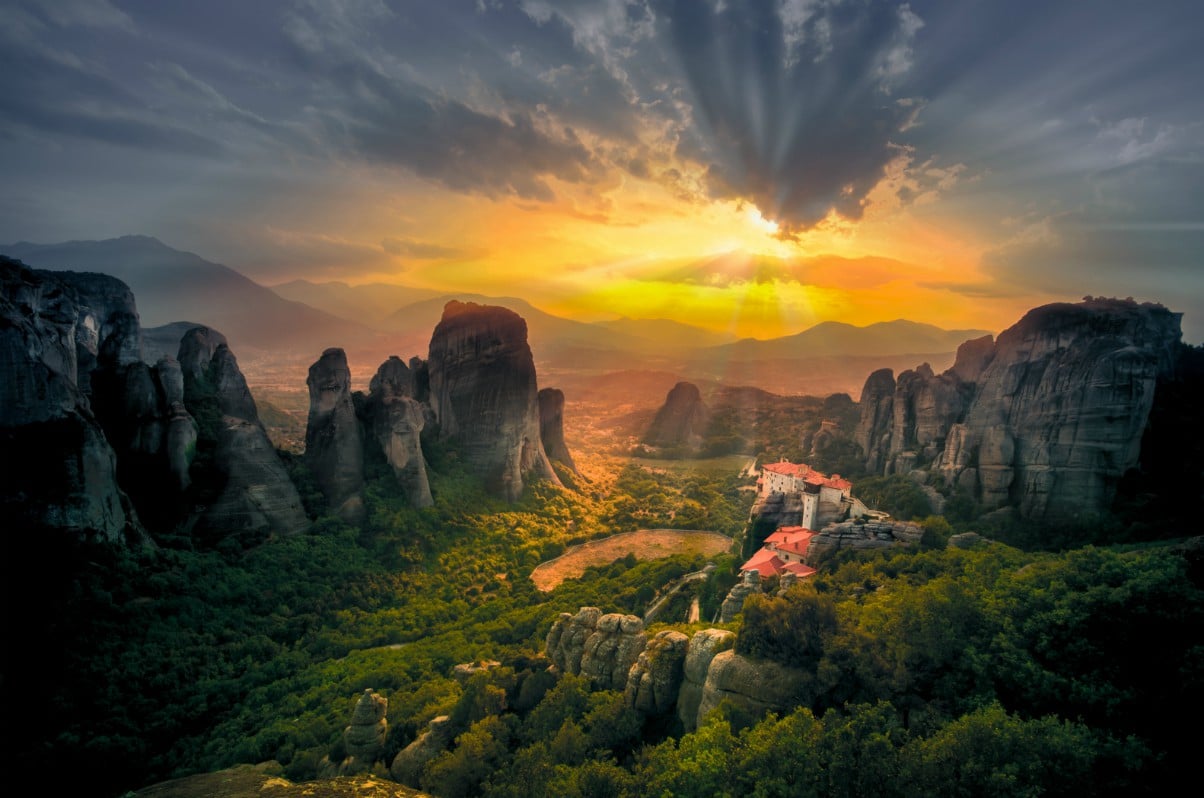 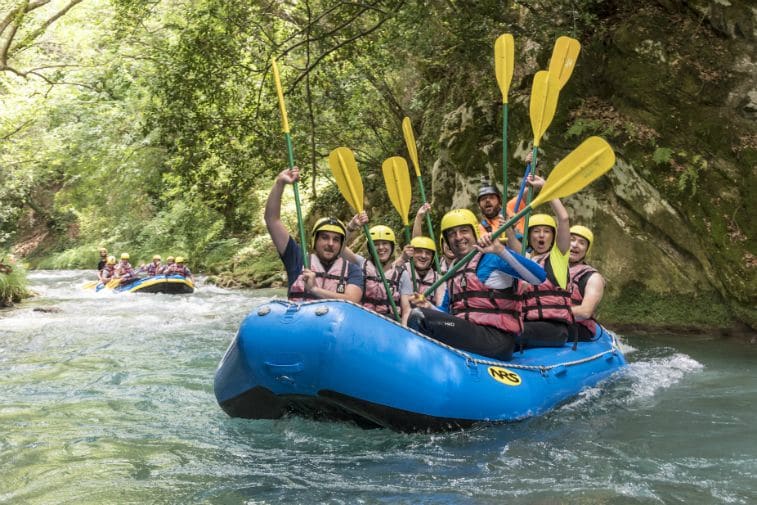