Gytheion is a town in Laconia. It was the seaport of Sparta some 40 kilometres north. Gytheion used to be an important port until it was destroyed in 4th century AD, possibly by an earthquake. Today it is the largest and most important town in Mani.

Gytheion was built on a hill called Laryssio. The founders of ancient Gythiοn were Heracles and Apollo, who frequently appear on its coins or in other legends, Castor and Pollux:  In 455 BC, during the First Peloponnesian War, it was burned by the Athenian admiral Tolmides who besieged the city with 50 ships and 4,000 hoplites. It was rebuilt and was most probably, the building ground for the Spartan fleet in the Peloponnesian War. In 407 BC during the Peloponnesian War, Alcibiades landed there and saw the thirty triremes the Spartans were building there. In 370 BC, the Thebans under the command of Epaminondas besieged the city successfully for three days after ravaging Laconia. However it was recaptured by the Spartans three days later.

Gytheion formed the most important of the Union of Free Laconians, a group of twenty-four, later eighteen, communities leagued together to maintain their autonomy against Sparta and declared free by Caesar Augustus.

In Roman times Gytheion remained a major port and it prospered as a member of the Union. As purple dye was popular in Rome, Gytheion exported that as well as porphyry and rose antique marble. Evidence of the ancient Gytheion prosperity can be found by the fact that the Romans built an ancient theatre which is well preserved today and is still used occasionally.
Destinations Peloponnese Gytheion Epos Travel Tours

Some time in the 4th century AD, Gytheion was destroyed. What happened to Gytheion is not recorded but it is thought to have been either sacked by Alaric and Visigoths, pillaged by the Slavs or destroyed by the massive earthquake that struck the area in 375 AD. After the earthquake Gytheion was abandoned. It remained a small village throughout the Byzantine and Ottoman times. Its importance grew when Tzannetos Grigorakis built his tower at Cranae and more people came and settled at Gytheio. But during the Greek War of Independence, refugees flooded into Mani and made Gytheio a major town. The modern Gytheio opened a port in the 1960s. Ferries sail from Gytheio to Kythira almost daily and also to Crete twice a week.
Destinations Peloponnese Gytheion Epos Travel Tours 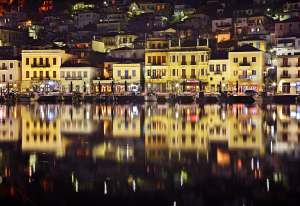 Pausanias has left us a description of the town as it existed in the reign of Marcus Aurelius, the agora, the Acropolis, the island of Cranae (Marathonisi) where Paris celebrated his nuptials with Helen of Troy, the Migonium or precinct of Aphrodite Migonitis (occupied by the modern town), and the hill Larysium rising above it. The numerous remains extant, of which the theatre and the buildings partially submerged by the sea are the most noteworthy, all belong to the Roman period.