About half an hour after Lerna we arrive at Astros and Paralio Astros with the endless beach. Here, the Second National Assembly (1823) was formed to vote for the revision of the first Greek Constitution of Epidaurus (1822).

Paralio Astros is today a holiday resort. The Moustos wetland, the Loukas Monastery and Ancient Eva, where the ruins of Herodes Atticus villa are found, are very close. 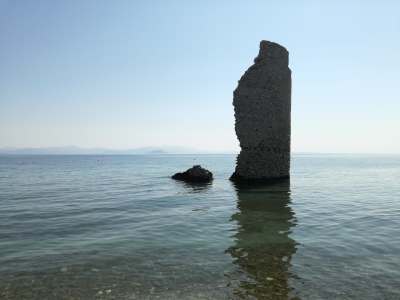 In Astros in ancient times, there was the city of Thyrea.

Ancient Thyrea and the whole fertile coastal area had been claimed for centuries by the cities of Sparta and Argos.

After repeated conflicts, we arrive at one of the most shocking battles of Greek history, the battle that was given in 546 BC. and has remained in history as “Battle of the Thyrea” or ‘’ the battle of the champions’’.

According to Herodotus, they had been feuding for a while about ownership over Thyrea. The decision was made to settle their differences in a single, pitched battle. Each side would pick 300 of their best men. The assumption is that these men fought as hoplites, with orthodox scholars assuming that they would be deployed in phalanx formation. The remainder of the forces would withdraw to their home cities to await the outcome of the battle.

The two sides clashed and fought for the entire day. Their forces were so well matched that by nightfall only three warriors were left alive: two Argives and a Spartan. As they outnumbered their enemy, the Argives considered themselves the victor and rushed back home to Argos to tell their compatriots. But the Spartan survivor, whose name was Othryades, stayed at his post and began to strip the enemy of their armour, carrying the spoils back to camp.

A little later, the Spartans and Argives returned to the battlefield. The Argives claimed to have won because their two survivors outnumbered the lone Spartan. But the Spartans said they had won, since unlike the Argives, Othryades hadn’t abandoned his post. The dispute between the two sides flared up and soon devolved into an all-out brawl. Eventually, the Spartans defeated the Argives.

The Battle of the Champions is noteworthy as one of the few known instances of champion combat. Within the context of Herodotus’ book, however, the Battle of the Champions is used to explain a particular feature of Spartan and Argive cultures. Having lost Thyrea, Herodotus writes, the Argives decided from then on to always cut their hair short “and even pronounced a curse: that no Argive man could grow his hair long, and no Argive woman could wear gold, until Argos had won back Thyrea”. The Spartans, for their part, decided to celebrate the victory by growing their hair long, whereas before they had supposedly kept it short.

Best things to do in Astros

Guiding services and transfers in Astros